Yekamma Pawar came to Pune with her parents and 2 older brothers from Karnatak last year. The family stays in a temporary slum in Nakhati Nagar, Rahatne and the parents work as daily wage earners for contractors. Yekamma attended school in her native village till 2nd standard. Door Step School staff had been meeting her parents since last year in order to convince them to send her to school in Pune. Every time we met them, they would say they did not have time to go with her to school for her enrollment (taking a day’s leave from work meant not getting paid which, for them is a huge loss). Yekamma’s mother would also ask us who would look after the house if she went to school? After all someone needed to be at home for the daily chores of filling water, cleaning the house, cooking.

The girl kept telling our staff how much she wanted to go to school. We would tell her how we were trying to get her parents to agree. We also told her to speak to them, tell them how much she wanted to learn. After much convincing from the DSS staff and Yekamma herself for almost a year, this year the parents finally gave in. They took 2 days off from work and came with our staff to the Rahatni Girl’s School (No. 55) to enroll Yekamma to 4th standard. She has been regularly attending school since then. She has also been an active participant in various sports activities lately: she won the first prize in long jump in an event organized by Bajaj, in the same event, her school won the lezim competition and she was declared to be the best flag bearer. About 115 schools participated in a sports event organized by the Pimpri Chinchwad Municipal Corporation in which she got the second place in 50 meters running competition and was declared the best flag bearer in the lezim competition in this event too. Yekamma's parents too are now happy seeing her do so well and are glad they sent her to school.

When DSS recently spoke to her teachers about her progress at school they were impressed with her, they said they initially had doubts about her even coming to school regularly but now they are happy with her sincerity.

Her sports teacher Mr. Ganesh Lingade, said she shows great potential in sports, and she is especially good in Kabaddi. He said they plan to prepare her for school level Kabaddi championship next year.

We are thankful to Yekamma’s parents who finally agreed to send her to school. We are proud of Yekamma and hope to see her succeed at school and in sports. We hope that all the parents understand importance of education. 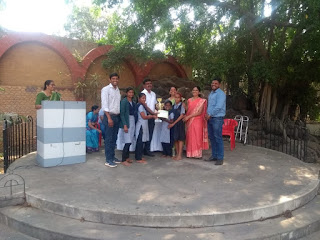