Rajani tai was invited to speak at Indian Institute of Education,Pune on July 15, 2018 on the 100th birth anniversary of Dr. Chitra Naik, known for her contribution in the field of education.  A common thread that binds Dr. Naik and Rajani tai together is their passion for eduaction with focus on non-formal education and education for children from marginalised communitites.

While addressing the students of IIE, Rajani tai emphasized on the importance of offering education to children from underprivileged communities by understanding their needs and challenges. A different and more practical curriculum could also be designed for these children. It is the only way to develop an interest for education in them and hope to spread literacy.

Posted by Door Step School, Pune at 12:41 PM No comments:

One more "School on Wheels" added to the fleet.

We are glad to announce the addition of one more School on Wheels to our fleet of 4 buses. Door Step School, Pune inaugurated its 5th School on Wheels on 19th July 2018.Supported under NICE Interactive Solutions India Private Ltd.'s CSR initiative, this bus will serve as a mobile classroom and a mobile reading room for children living in roadside settlements and construction sites in Pune and PCMC. 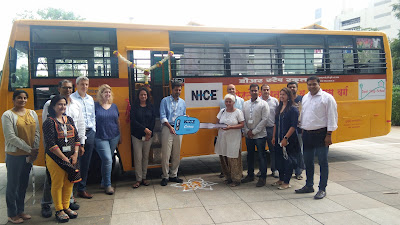 A quote that holds true for so many people and organisations working towards the upliftment of the underprivileged. For those who are working at the grass roots, it is always their work that takes the top priority and it is only through word of mouth that the common man is made aware. However when communication was never so effortless as of today and the reach of media never so restricted, it is but natural to have media houses rooting for what interests them and their audiences.

One of such names is the Borgen magazine, one of the media channel for people interested in global issues, politics and human rights. We are very proud to share with you that Borgen magazine has published our story - Door Step School and the Brain behind it.

Posted by Door Step School, Pune at 12:30 PM No comments:

An inspiration for all!

Sometimes surprises come from unexpected quarters. That day it came from the team of our drivers, eight of them in all. They were all standing in front of us, Mr. Alkunte, the leader was standing in front of them with a bundle of books in his hands. The rest of them behind him, all with a smile on their face and a look of pride in their eyes.

When Mr. Alkunte was asked the reason behind this gesture, he said, “I never read books before, but Nagesh sir, gave me a book to read. It was a big fat book and I was not sure I would be interested in reading it. But he insisted that as a driver I had a lot of time in between driving trips and hence I  should use it for reading. By the time I finished that book I started liking reading and continued reading more and more books. “Who Moved My Cheese” was one of those books and it proved to be a turning point of my life. I learnt two things from the book. I realised that one has to be ready to accept change and one should share with others what one has learnt. Be a leader and show direction to those who are behind you".

Mr. Alkunte did just that. He motivated others from his team, other drivers, to read. The task was not easy. He faced the opposition but finally he was able to convert them from non- readers to readers. And then one day they all thought of donating books to our staff library. The selection of books was amazing. But more amazing was the thought behind the gift, “The organisation has given us so much. We want to show our gratitude. Gift of books is just a token” they said.