Ganesh Baburao Sutar is a 15-year-old boy studying in 7th Standard at District Primary School in Undri, Pune. He has two sisters - Pooja studying in 6th Standard and Poonam studying in 5th Standard. After demise of their parents 10 years ago, all three kids are looked after by their three maternal uncles. The uncles work as construction workers in Pune and have their own families and kids, too. Despite their low-income jobs, they take very good care of these three children and are concerned about their education. Ganesh and his sisters are enrolled in government schools and the uncles ensure that all of them attend the school regularly and learn well.

Three years ago, Door Step School launched a project focused on empowering parents to send their children to schools. During surveys and meetings for this project, our field team met Ganesh and his family in Undri, Pune. Ganesh was already attending a school then, but his sisters were not. Our team met the guardians and got the two sisters enrolled in the same school. During our first visit to his community, Ganesh enthusiastically helped the team in approaching other households for collecting information about out-of-school children. He has always been a smart and helpful child.

Ganesh is very regular and sincere at school. He is good at studies, especially in Mathematics -  a subject which most children his age are afraid of. He also helps other students with their studies. Naturally, teachers at the school are all praise for him.

Ganesh’s prowess at Mathematics prompted us to look for ways to further his knowledge of the subject. We approached Mr. Barve of Bhaskaracharya Institute, Pune, who facilitated Ganesh to attend a four-day Maths workshop at the institute. After the workshop, Mr. Barve suggested we send Ganesh to attend Prof. Gore’s Coaching Class in Shanivar Peth. We have enrolled Ganesh to the class and he has now started attending it regularly and is also liking it.

Although Ganesh has started with the class, there still is a big question mark on availability of funds for his education. He travels to Shanivar Peth from his house in Undri, which is ahead of Kondhwa. The annual fees and transport costs are summing up to Rs.18,000/-, which are beyond the financial capacities of Ganesh’s uncles. Taking care of day-today needs of the three children was just about what they could afford so far.

We are looking for sponsor to support further education of a bright child like Ganesh Sutar. If you wish to contribute or know someone who could help, do contact us on pune@doorstepschool.org or 9371007844. You can also help by sharing this post with your contacts. Thanks! 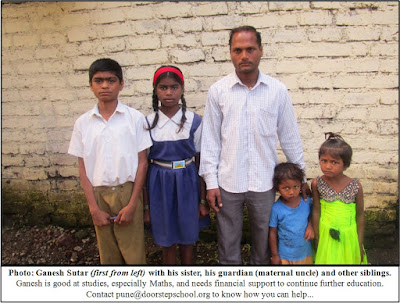 Posted by Mandar Shinde at 1:42 PM