"It was an awesome experience celebrating the 69th year of our Independence with the children at DSS – Blueridge Construction Site Class. Everyone was very excited, especially the children and teachers, as they were unaware of our celebration plans. We had all arrived at the site at 9:30 am sharp. It all started from singing of our National Anthem and then all the volunteers introduced themselves. We had taken Balls, Balloons, Chocolates, and Toffees, Biscuits, and Stereo Set with us. And on noticing all this with us, all of the children got very excited.

So after the National Anthem was over, everyone went for Prabhaat Faery (Morning March) which is just in a group taking a round of your nearby area singing Patriotic Songs with slogans of Inquilab Zindabad and Vande Mataram. It was a time to capture their happiness and satisfaction on every volunteer’s face. We had some very nice photography sessions in-between on the way. Each and every volunteer was feeling a sense of satisfaction and for all of us it was a first experience. It was around 11 am that we returned to our school camp. And Now it was the time for the games which we had planned to be played with them. We played Cup and the Ball, Ball and Basket, and Dog and the Bone. Winners were given various gifts. We had also arranged some simple games for the parents, using straws and rubber bands. Everyone participated be it a teacher, volunteer, or neighbouring people. Now it was the time to have to impart them some knowledge of pre and post Independent India, using simple tools of taking Quiz and giving freebies. At the end, it was the DJ dance which was much awaited by all of the volunteers.

On the whole, it was a memorable visit for every one of us!" 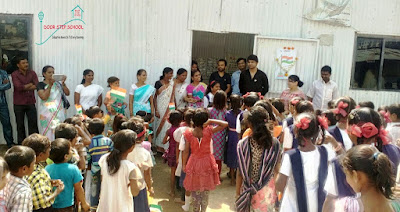 Posted by Mandar Shinde at 1:51 PM

Email ThisBlogThis!Share to TwitterShare to FacebookShare to Pinterest
Labels: Volunteers