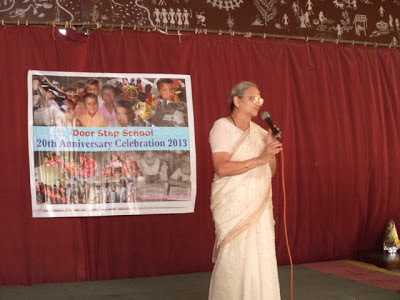 Door Step School, the NGO working for education of underprivileged children in Pune, held their 20th anniversary function on 11th of May. Door Step School (DSS) teachers, staff members, volunteers, funders, and well-wishers attended the event in large numbers. Describing the journey of DSS over last 20 years, Founder-President Rajani Paranjpe said, “Education is the only solution to all problems like inequality, unemployment, poverty, and child labour etc. Hence, we started Door Step School 25 years ago in Mumbai and 20 years ago in Pune. Knowing that there is no alternate to elementary education in today’s times, DSS took up the challenge of taking underprivileged children to basic literacy level. Considering the migration issues of migrant workers’ children, DSS has been successfully taking the school itself, along with teachers and learning material, to their own doorsteps. DSS has been effectively reaching out to children through various projects like Reading Classes in Pune and PCMC schools, School-on-Wheels bus for street children, Study Centers for slum-dwelling children, School Transport for children living on construction sites, and Citizens’ Campaign to enroll out-of-school children in schools under Right To Education Act.” Mrs. Paranjpe also said that DSS got the strength of taking up all these challenges only through thousands of willing hands joining the literacy movement. However, mentioning that the goal is not yet achieved, she appealed that more organizations and individuals should join hands in taking benefits of education to every child in Pune. DSS teachers and coordinators presented annual reports of their projects in a different way. An exhibition of teaching aids prepared by DSS teachers was organized for the attendees of anniversary event.
Posted by Mandar Shinde at 3:52 PM